The Vaginal Speculum: from its unearthed secrets to our modern times

Homeopathic remedies, excavated tools, sexual taboos, questionable medical ethics of testing on slaves, and handful of influential physicians have paved the way for the modern instrument of today.

The vaginal speculum that most OB/GYN practitioners use today has a long history, dating back to ancient Rome. The doctors that lived in Pompeii before the Vesuvius eruption were the first to use and manufacture this medical tool. Original instruments were excavated from their ruins in 1770 at a location known by archeologists as The House of the Surgeon1, named for the amount of surgical instruments unearthed at the site. Primitive vaginal specula date back to the year 97 A.D. They were manually operated by a corkscrew, and composed of dovetailed valves that opened and closed to allow detailed examination. Their design is similar to the ones used today.2 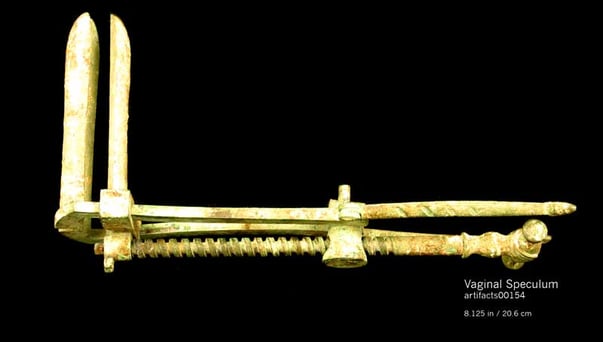 After the fall of the Roman Empire, in the subsequent Middle Ages (5th to 15th century), close examination of a woman’s body was considered sinful or taboo. Midwives were in charge of helping women during childbirth and any vaginal discomfort or malady was treated with homemade herbal remedies.

Updated versions of the vaginal speculum emerged during the 1800’s. In 1821, Giuseppe Cannella, an Italian surgeon, created a hybrid of a speculum with a knife, destined to amputate the cervix when cancer or uterine prolapse was diagnosed. However, he never got to operate on living women. The book The Medical Intelligencer, published in 1822, states that “Dr. Cannella devised and constructed an instrument for extirpating the affected parts, and removing them at once. He has not yet had an opportunity of employing it in practice, but from some experiments on the dead subject.”3

Men populated the era of 19th century physicians, and were discouraged from looking at a naked female patient. Medical examinations were done blindly; the doctor would find his way under a blanket or the woman’s dress while looking away. Also, there was popular belief that a woman might turn into what author Johanna Gohmann termed “raving sexual maniacs” if allowed to be intimately touched by a man.4 Although Cannella found a way to remove cancerous portions from the uterus, unfortunately he never had the opportunity to operate his device on a living patient.

In 1825, a French midwife called Marie Anne Boivin, invented a vaginal speculum that could be screwed into place and dilated the vagina to allow close examination of the cervix. Her invention evolved into the modern bivalve speculum. She made great contributions to medicine, discovering the cause of different types of bleeding, miscarriages and diseases of the uterus.5 Marion Sims is credited as “The Father of Gynecology.” He was the first physician to successfully operate and cure a vesicovaginal fistula, a painful complication of childbirth where a hole grows between a woman’s bladder and her vagina, leading to uncontrollable urinary and sometimes fecal incontinence. Several authors and researchers have attacked Sims’s medical ethics, citing evidence suggesting that he carried out surgeries on black slave women without their consent and without anesthesia. Two case studies are summarized below:

Despite the horrific pain these women endured, they were finally cured. By 1883, the year Sims died, he had established a worldwide reputation as a great surgeon and gynecologist. Statues of him and hospitals named after him can be found in New York and in South Carolina.7 There are also several uterine and vaginal surgical instruments that bear his name.

Feminism and sexual revolution in late 20th century brought about change in the way gynecological issues were discussed, and treated. More female physicians are now opening clinics and writing books about women’s health, anatomy and the use of the speculum.

When we look at today’s modern duck-billed speculum we can see its design and shape have not changed much, save for Thomas Graves’ adaptations in the late 19th century.8 Gynecologists now have several options available. For example, Sklar offers a Graves style ready-to-use disposable vaginal specula made of clear plastic material that allows 360⁰ visibility and reduces thermal shock. Sklar also features two lines of instrumentation with a great variety of vaginal specula for each. There is the electrosurgical line, Sklar Blue, manufactured with the highest quality stainless steel and a special coating that prevents transmission of RF current through the instrument. There is also the Sklar Black laser line, which has a specially designed polymer coating that reduces reflected laser energy to less than one tenth of one percent!

With so many technological advances it is hard to tell where the evolution of the vaginal speculum will lead. The female anatomy has not changed in centuries, so if improvements in design have not varied much, the techniques used for diagnosis and surgery likely will.

See Sklar’s full fine line of gynecological instruments, including vaginal specula by clicking the button below.