Patients should be aware of a medical practice that has become dangerously common during the last few years. Disposable medical instruments are being reused by hospitals even though manufacturers insist that these devices should be used once and then thrown away. So, why do some hospitals reprocess single-use instruments? Their answer is simple. They claim it saves them money. Why use a disposable pair of scissors to cut the umbilical cord on only one newborn child, when it’s better to reprocess them and use them on two newborns? The full price they paid for a single pair of scissors gets cut by 50% when utilizing this practice. 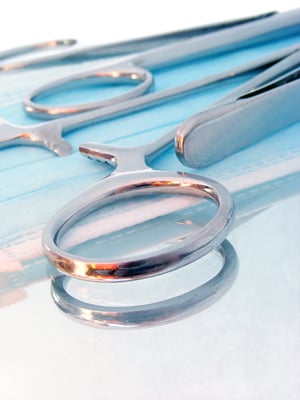 Another reason falls heavily on technology. New advances and developments make single-use instruments look as sturdy and safe as reusable ones. However, there are some critical issues linked to this reasonably “safe” practice. In the majority of cases, if not all of them, patients are not informed whether reusable or single-use instruments will be used during the procedure.

The legal consequences of malpractice, due to an instrument’s malfunction, is something that doctors should be aware of too. The American College of Obstetrics and Gynecology (ACOG), for example, has called for studies that “evaluate the safety, quality and cost-effectiveness of reprocessed single-use devices…physicians should be informed whether instruments used in surgery are original or reprocessed, and adverse events should be reported.”1  Likewise an ophthalmology trade journal article advises: “malpractice claims in which contaminated single-use instruments play a role are among the easiest for plaintiff's attorneys to win as the evidence is usually compelling.”2

According to the U.S. Food and Drug Administration (FDA), cleaning and sterilizing medical instruments that were designed for a one-time use may turn out to be more challenging than sterilizing instruments manufactured for several uses. Some instruments have characteristics that make cleaning almost impossible; obtuse angles, miniature coils, narrow lumens, and special coatings. Exposing these instruments to high pressure and temperatures during the sterilization process may also damage the original properties of their construction materials, or cause them to degrade. This is the case with catheter devices, which lose elasticity, durability, and even their original lubricants.

Improperly cleaned instruments can also cause prions. Prions are infectious agents with no DNA acid. Their known component is an abnormally configured protein. When prions come in contact with a host, through blood, they cause prion diseases. These diseases are fatal and cause infectious neurodegenerative disorders in humans. One such disorder is Creutzfeldt-Jakob Disease, a relative of Mad Cow Disease. Vaccinations or treatments for prion diseases have not been discovered yet.

Patients should have the right to know whether the reuse of single-use instruments increases their chance of getting an infection, or if their use can compromise the success of the procedure: “Single use devices are not manufactured, tested or validated to withstand reprocessing. They should not be used unless a risk assessment has been carried and it can be proved that using the single use device would not have a detrimental effect on the patient.”3

The FDA approves the sale of a single-use instrument if the manufacturer proves that it is safe and effective for one use only. What hospitals decide to do with a single-use instrument, after its intended purpose, has not been properly regulated. However, since cross-contamination and infection cases seem to be increasing, they’ll now look closer into this unethical practice and hopefully forbid it for good.

Woods, Michael (2000, December). CJD/Outrageous – Not All Single-Use Medical Instruments Used Only Once.