Origins of the Obstetric Forceps

It was not until the 16th and 17th century that new ideas began to develop, and the story of the obstetrician’s forceps started, with the Chamberlen family. After the battle of Jarnac in 1569, Catherine de Medici, the Catholic Queen Mother and governor of France, banned Protestant (Huguenot) physicians and many had to flee France if they wanted to continue practicing. This is when the French Huguenot, William Chamberlen migrated to England with his family. His two sons, Peter the elder and Peter the younger, both became members of the Barbers Surgeon Company, and both were fined for not attending lectures, and fell out of the College of Physicians. It is unclear which of the two came up with the idea of the forceps, but many historians believe it was Peter the elder, because he attended Queen Henrietta Maria, wife of Charles I, and was present during the birth of their child, Charles II in 1630. It was Peter the younger’s son, known as Dr. Peter Chamberlen or Peter the Third, who actually received formal education at the Universities of Oxford, Cambridge, Padua and Heidelberg.2 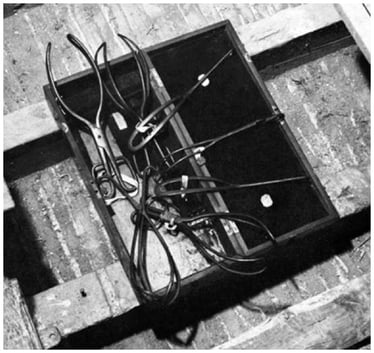 The Chamberlens took great care to keep their instruments in the dark. They concealed their forceps in a gilded chest and opened it only after the woman in labor had been blindfolded. The birth took place under blankets where only the Chamberlens, were left to attend the patient.3

Original Chamberlen  forceps found in secret compartment at Woodham Mortimer, Essex. * Reproduced with the permission of the Royal College of Obstetricians and Gynaecologists.

By mid18th century a new circle of midwives were established, and among them, William Smellie became the most outstanding obstetrician of the time. He developed his own forceps to “avoid this loss of children which gave him great uneasiness.”4 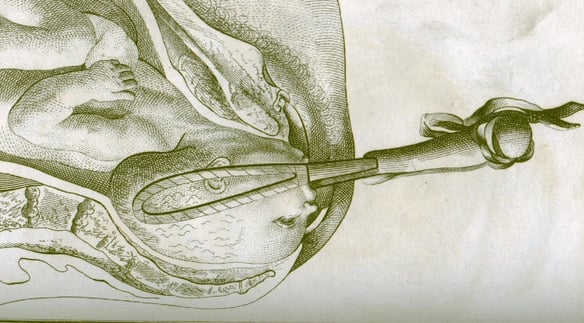 The features that Smellie used to design his instruments still remain in present time. He took care to consider the woman’s pelvic curve and was the first physician to describe the rotation of the baby’s head with the forceps. Smellie’s understanding of a woman’s anatomy made him care about the forceps’ blades design. Although they were made of iron, the blades were slender and broader at the tips. They were covered with leather and lubricated with pigs lard before using.5

From the 19th Century to Our Times

During this time, the British started manufacturing instruments in carbon steel and stainless steel, which is a lighter material. Although other different and complex designs for forceps emerged throughout Europe, the original designs from mid18th century continued to be used. The introduction of anesthesia and more fetal considerations started to prevail, making the Caesarean section safer. High forceps slowly became obsolete and more precaution was employed when using mid-cavity forceps. The baby’s rotation of the head as a technique became extinct as well. There was a rising concern to protect the baby’s head rather than compressing it. By mid-20 century a vacuum extractor started to replace forceps in many hospitals, but it’s no longer popular today. Currently the Caesarean section seems to dominate as the solution to a difficult birth. The use of forceps has changed dramatically, and even though the obstetrician forceps is still available, it is employed sparingly as a last resort when there is no risk of damaging the baby or the woman. Today forceps are used for other several uses. The most common types of forceps used in today’s medical field are: 6

If you would like to browse through Sklar's fine line of surgical forceps, please click the button below.